Pressure-based input can provide a wide, expressive range of continuous input for mobile devices, expanding the input vocabulary of current capacitive touchscreen devices. Pressure input has been shown to be highly accurate and useful in a variety of stationary desktop interfaces, but our research has looked at how well pressure input can be controlled when the user is a) walking, b) provided with only audio feedback and c) interacting with small mobile devices. Our research has shown that both walking and using spatialised audio feedback significantly impair the precision of pressure applied to mobile devices, as well as acting to increase interaction time. However, the use of alternative control methods can mitigate some of these issues, facilitating highly accurate non-visual pressure input when walking. 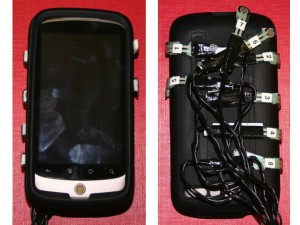 We commonly hold our mobile touchscreen devices in one hand, but generally use just a single digit for input (i.e., the thumb). With up to five digits in contact with the device around its edges there is the possibility of utilising multiple inputs simultaneously, to increase the available input bandwidth. One-handed touchscreen input can be limited to 2D panning and scrolling. More complex movements, such as zooming and rotating, generally require two hands to operate: one hand to hold the device and the other hand to input a multitouch gesture. Using multiple, continuous pressure inputs could allow for more complex interactions on mobile devices when using only one hand and, as input is provided around the edges of the device, the screen remains fully visible and not obscured by fat fingers.

Our research has measured how accurately users can apply pressure to a mobile device using each digit of one hand, as well as in multiple combinations, when holding the device one-handed. From these results, we compared one-handed multi-digit pressure input (MDPI) with two-handed multitouch gestures for zooming and scrolling in a map task. We found that pressure input was faster, but slightly less accurate, than multitouch, suggesting that one-handed MDPI could substitute for two-handed multitouch, when up to two axes of control are available.